Among the cool things that the Disney parks offer are tours – all kinds of tours. The thing that makes Disneyland special is that it is the only Disney park that Walt Disney actually saw to completion. Walt did see the Florida property, but he wasn’t alive to see the Magic Kingdom completed. That was left to his brother Roy.

“A Walk in Walt’s Footsteps” Tour at Disneyland is a completely special experience that allows the neophyte to learn about the legacy of Walt and Disneyophile to revel in the genius of the man who has brought so much joy, creativity and imagination to the world.

The tour changes from year to year, and this year’s tour offered the best opportunity of all the tours so far. Tour guides lead participants through the park for three hours using audio equipment that includes headphones so that everyone can hear. (You don’t have to crowd the guide, just stay within broadcast range.)

Everyone gets a lunch or dinner made at the Jolly Holiday Bakery but eaten at the Tour Gardens after the tour. Buttons identify participants, and pins are handed out after the tour. 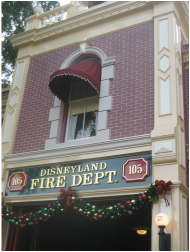 The Fire House with Walt's apartment on top.
The tour started off with a stop at the Fire House, above which is Walt’s apartment. When Walt was in the park, the cast members knew it because there was a light burning in the apartment to let people know that the boss was in.

Now, Disneyland keeps a light burning in the window as a reminder that Walt is still in the park. During the holiday season the light is moved to a side window and a Christmas tree replaces it in the main window because Walt loved the Christmas season.

While here, the tour guide gave us some insight to the design of Main Street, U.S.A., which includes Marceline, Mo as part of its inspiration as well as Fort Collins, Co.

Guests were also told about Walt’s infatuation with Peter Pan. He once tried to rig up a flying harness in his barn after seeing Peter Pan.
Continue with A Walk in Walt's Footsteps part two