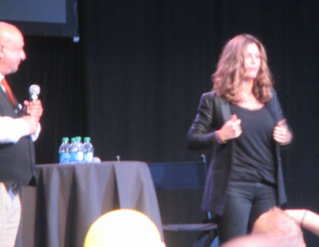 Tony Toscano stands to left allowing
Charisma Carpenter and her fans to connect.
Too often, the Salt Lake Comic Con guest moderators don’t get enough play, and it is easy to see why. Even though people like Paul Draper, Tony Toscano and Susan Fox are stars in their own right, as moderators, their jobs are to make sure that the guest is comfortable, that the audience is prepared and to only help when it is needed. In essence, they are supposed to dim their own stars enough to allow the guest to shine.

At the top of his game, when it comes to being a moderator, Toscano is the ultimate professional. He knows that he is there to make sure that everyone has a good time and to help a nervous or first time guest get through the appearance. Whether he is moderating for Anne Serling or Charisma Carpenter, Toscano allows them to shine.

More importantly, Toscano has a knack for knowing when to clarify a question and how to do so in such a way that both the guest and the person who asked the question feel satisfied. Sometimes, this means translating a rambling question into something more coherent. Sometimes, it means compensating for an unruly sound system. Sometimes, it means finding a question that the guest isn’t embarrassed to answer. No matter what the situation, Toscano has been there to make sure that the celebrity guest is able to connect with the fans and feel comfortable.

I didn’t go to see Serling or Carpenter because Toscano was the moderator, but having him there with those two guests made everything easier. Whether he was helping Serling with her nerves, or he was prepping the crowd for no photos or video with Carpenter, Toscano made all the difference in how those panels went. He kept himself engaged, the conversation flowing and only stepped in when he was needed. Maybe it is time to give Toscano his own panel at Salt Lake Comic Con.