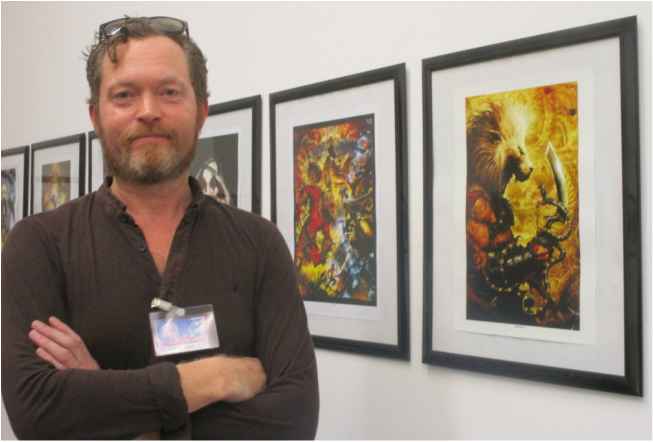 Clint Langley poses with his work on Hercules nearby.
Artist Clint Langley gave a tour of his exhibition of art at Malta Comic Con 2014. He has worked with the Guardians of the Galaxy, Hercules, Wizards of the Coast, White Wolf and several other companies. One of his favorite characters is Nemesis the Warlock with Slaine being a close second.

His early work on Slaine resembles the era that it is supposed to represent. With Pre-Raphaelite homages and muted tones heavy in ink.

“I kind of like the grungy, old world style,” says Langley.

It is a far cry from the work he needs to do for Marvel, which features a lot of colors and a much lighter style. When he was given the Guardians of the Galaxy work, “this will never work” as a movie, but it did. He says that Guardians was fun to work on because it had a raccoon and a tree…

Magic: The Gathering commissions feature loose briefs about what the card game company wants. Langley enjoys the freedom that the open-ended requirements allow him because he can use his imagination.

“That’s the best kind of compliment,” says Langley. Artists produce their best work when they are given freedom.

Some of Langley’s favorite subjects are villains. Their clothes look cool, especially in the Spaghetti Westerns.

“When it comes to evil, I can bring something evil,” says Langley. “They’re always scowling.”

His dream team up would be the Alien, Darth Vader and some Spaghetti Western cowboys.

Langley claims that he has been lucky when it comes to working in the comic art world. He landed a job very early on, at the age of 21, and jobs came to him after that. Langley has worked in water colors and pen and does a lot of his art using digital tools.