Micky Dolenz monkees around at FanX 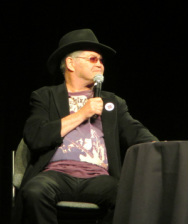 During their first tour, Jimi Hendrix opened for the Monkees. People would be shouting “We want Davy!” while Hendrix was playing.

The Monkees will be going out on tour again in May for a couple of weeks back east.

Micky Dolenz started acting on Circus Boy. He played a concert at Kennywood where he opened for the elephant from the show. Both of his parents were actors.

“I just followed in my father’s footsteps essentially,” says Dolenz.