The JOurney to Slaine and beyond at Malta Comic Con 2015 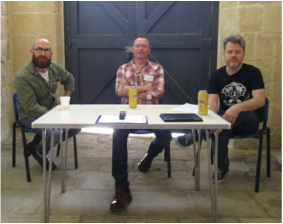 Davis was into dinosaurs up until Star Wars was released. Because he didn’t have any money to buy action figures, he would draw the characters. Other films like E.T. and Close Encounters also influenced Davis.

His father was a painter. “It was quite helpful” to have an example of an artist while Davis was growing up. Although he studied graphic design, Davis didn’t enjoy it. He always wanted to do comics.

One reason for Davis wanting to do comics was that there is an element of imagination in comic books. A film has everything in it, but a comic book leaves some things to the reader to figure out.

Davis has storyboarded a Tori Amos and other music videos and works in portraits. See what Simon Davis says about creativity in the video below.

“I wasn’t massively into superhero comics,” says Langley. 2000 A.D. was the comic he was looking for when he was young. “I love comics” mostly for the art. Langley was into Spaghetti Westerns. “I love those kind of hero like stories."

“My parents were both artists,” says Langley. His mother was a painter, and his father created “very weird designs” like a drawing table that had everything an artist needed including a commode. “That’s dedication to art.”
Drawing was the only thing that Langley wanted to do. He was surrounded with art.

“I suddenly realized that comics didn’t create themselves,” says Langley. However, “I was given very little encouragement” to pursue that career path. Clint wanted to make comics more cinematic, drawn in great detail and “in your face.”

“My style lends itself to book covers,” says Langley. He has also done Magic the Gathering cards and storyboarding, “but there’s something lovely about comics… That’s where my greatest joy comes from.”