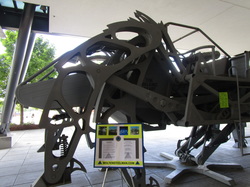 “It took a few years to get all the bugs out,” says Motessano.

Montessano found inspiration in a toy that he had when he was about four or five years old. The toy was mechanical and walked on six legs. He was later inspired by Ohio State University’s Adaptive Suspension Vehicle. Montessano wanted something that was larger than his childhood toy; he wanted to build something that was truly impressive. The Walking Beast can go up slight inclines and over uneven ground like plowed fields.

The Walking Beast has 56 pivot points and 114 bearings just in the linkage and arms. Motessano designed it with a single crankshaft system, which on a model scale created an uneven movement that went quickly down and required additional torque to raise the arm again. He solved the problem with coil springs that dampened the downward force and made the arm flow more smoothly upwards. Montessano eventually wants to move away from a mechanical system to one that is hydraulic, so that the machine can generate more torque and be more precisely controlled.

Montessano’s Moltensteelman workshop offers some items to the general public, including a flame throwing dinosaur, affectionately known as the juvenile delinquent. This work of art is perfect for barbeques because the dragon really can breathe fire.
More about Northwest Comic Fest 2015