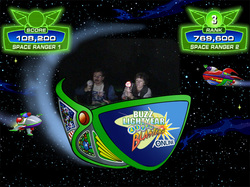 How did mom get #3 for the day?
At least the credit stayed in the family
Dec. 18 2013
Star Tours – The Adventures Continue: First of all, the name of this is a little bit of a misnomer in that the actions take place between the second trilogy and the original Star Wars. However, they take place before the adventure of the original Star Tours.

The ride itself is brilliant, in that, it features about 51 variations making each ride different most of the time and there is always someone on board who is the rebel spy. Unfortunately, as part of Tomorrowland, this ride fails on so many levels. If the original were placed “a long time ago,” then this one is even longer ago. With no Disney Hollywood Studios to house the science fiction history, Tomorrowland is the place where it is least disruptive to the feel if not to the actually storyline.

Buzz Lightyear Astro Blasters, the precursor to Toy Story Midway Mania, and it is a great attraction. Not only can you shoot things and rack up the score, but you can also send a photo home via email at no cost.

The Astro Orbitor, or If Dumbo Were in Space, futuristic design, flight in space. A ride that my sister enjoyed immensely and I did not, these circling rockets can be given the same pass as being a Space Mountain Zero. (I wanted to say “lite,” but that wasn’t going far enough to contrast the two.)

There are rumors that this will move to the platform above the defunct People Mover. That would displace the rarely functional time piece and kinetic light sculpture that sits there now.

Go back to Autopia and the Monorail
Go back to Tomorrowland is Todayland
Go back to Finding Nemo Submarine Voyage
Go back to Disneyland Railroad, Space Mountain and Innoventions
Go back to Captain EO and the Starcade