Sean Azzopardi and the Voice of the Hall 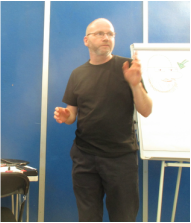 Sean Azzopardi
On 4 Dec. 2016 at Malta Comic Con, Sean Azzopardi presented his new project called “The Voice of the Hall.” The project is being funded by the Arts Council of England and is described as an “alternative” history for the Hornsey Town Hall.

England’s first modernist structure began construction in 1934 and was completed in 1936. After fulfilling its calling as town hall, the building was used as a film set and concert venue. Queen had its first gig there. The Hall was closed for about 30 years and left more or less like a time capsule. The building was converted into an art museum but has recently been sold to offshore interests that plan to close it to the public and turn it into a boutique hotel.
​
Azzopardi finds this concerning and says that London has become like Dubai. Things are built up and owned by Far East conglomerates.

“It’s changed to not the benefit of any of the population of London,” says Azzopardi. “I wanted to write the story about the gentrification process.”

Azzopardi’s “loose history” of the hall will be published in 4 parts by Soaring Penguin.

About Azzopardi
When he began as an artist, he couldn’t afford models, so he had his flatmate and his flatmate’s girlfriend pose for him.
“The working process can take a long time,” says Azzopardi. His first book took 5 years to complete. “Comics can be a solitary thing, or it can be a collaborative (effort).”

Azzopardi started the Crouch End Cartoon Art Festival to bring cartoon art awareness to his area.
​
“If there’s something not around, you have to create it,” says Azzopardi. He keeps his ideas in a pile of sketchbooks, which he goes through periodically.