Cannons fire over the Grand Harbor thanks to Wirt Artna 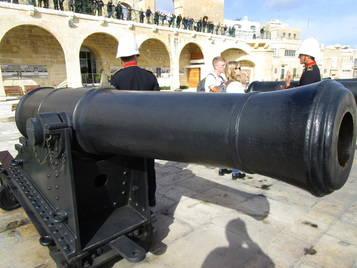 Cannon at the Saluting Battery
The Saluting Battery in Valletta, Malta fires its cannon once at noon and once at 4 pm every day. The 32-pounder is rear loading and was retired in 1907. All of the instruments used in the maintenance and use of the cannons is on hand; however, only the sponge and the brush are used for the cleaning now.

Wirt Artna is a non-governmental organization that is in charge of maintaining the historical accuracy of the Saluting Battery, as well as other historic sites like the 100-ton gun at Fort Rinella and the Lascaris War Rooms (also in Valletta). While there is a cannon fired twice a day, the cannons may also be fired on special occasions. Whether a 3, 5 or 7 gun salute, the cannons are fired one by one rather than all at once.

The cannon salute is preceded by an explanation of the history behind the Saluting Battery, and people are invited to get an up close visit with the cannons and the Battery after the salute. Those who decide to pay the small fee are treated to a guided tour that shows the differences between and ship cannons. Even better, those who are there soon enough can inspect the fired cannon and smell the sulfur on its still hot breath. Check out photos and videos below!