A brush with Mark Farmer at Malta Comic Con 2015 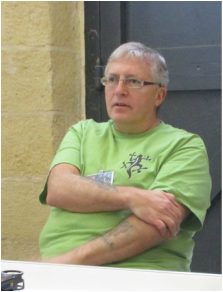 Mark Farmer
Malta Comic Con 2015 put the spotlight on inker Mark Farmer. Farmer grew up with DC and the normal British comics but discovered Marvel at about 8 or 9 years of age. He says that The Fantastic Four had incredible artwork.

Nobody thought that the British could draw American comics, so Farmer was going to be an illustrator. He got into comics by accident and started with a fanzine. When Dave Gibbons asked him for help on Green Lantern, it was the foot in the door that he needed for regular work with Marvel and DC.

As an inker, Farmer has used dip pens and brushes. Some brushes are good, some could be good with work, and some are “rubbish.”

“When you have a nice brush, you feel you can do anything,” says Farmer. He can tell whether the brush will work or not by running it across the page. Once a brush is washed, it won’t work again until it is dried.

Paper quality and texture can also affect how the inker works. Some paper feathers the ink, which may or may not show up in the final product.

“People say they recognize my style. I don’t think I have a style – a strong style,” says Farmer.