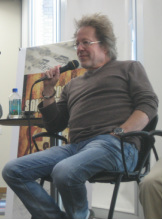 Steve Dorff speaks at
Salt Lake Community College
On March 21, 2014, as part of the Songwriter’s Summit in Utah, Dean Dillon, Steve Dorff and Paul McDonald spoke at Salt Lake Community College’s South City Campus. The Students’ Workshop is a precursor to the daylong event at The Depot on March 22, 2014, and the songwriters addressed challenges that the industry and individual writers face.

Dorff has written for people like Willie Nelson and Whitney Houston. He also has a Broadway musical under his belt and is the “cat daddy” of all genres of music according to Dillon.

“It’s a blessed life. You get to do what you love to do. It’s hard work,’ says Dorff. “It’s filled with rejection every day at every single level.”

Songwriters need to hustle if they want to be successful.

“I have always operated by the principle ‘whatever it takes,’’ says Dorff. “If you get to meet the bus driver that’s driving George Strait’s bus” do whatever you can to get the demo into the star’s hands. “If you can self-publish it, that’s great,” but you do anything you can to get that music out there.

Meeting other people will help a writer be successful and find someone else to work with.

“There’s no substitute for networking,” says Dorff. “Most of the great songs come from great collaborators.”

Songs are stories in and of themselves, and songwriters need to know what the beginning, middle and end of the story is before writing it.

“You’re coming up with this little movie in your mind,” says Dorff, “and you kind of have to figure that out, or you’ll be writing a long time.”

BMI Vice President of Licensing Dan Spears says that Dorff is among the elite songwriters.