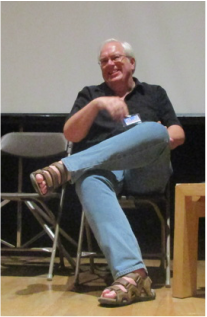 At Malta Comic Con 2014, Mike Collins was charged with Talking About Rendering Doctors into Strip-form (and storyboards). The trip on the TARDIS included delving into Collins other work as an artist who works in the comics medium.

Collins grew up with British comics, which were always drawn in anthologies. That meant that there were several stories written and drawn by different artists. When Collins drew his own comics as a child, he would sign each story with a different name. Some names, like Robert Crip and Rob McGuiness, he still uses for various reasons.

Collins discovered American comics when he was in high school. The cover that he remembers had several superheroes on it, including Captain Marvel and the Thing. There were so many characters that he thought the price was bargain so he bought the comic book. Since that time, he has always been a Marvel guy even when he was working for DC.

He went to school to be a lawyer but hated it and soon changed his major to politics.

He was drawing a comic and had left a cliffhanger that he had no idea what he was going to do with it. When he met Alan Moore at a comic convention, Moore asked Collins what was going to happen next. Collins said that he and no idea and asked Moore if he wanted to draw it. Moore said that he would, and sent Collins the ending a couple of weeks later.

Collins and his wife had to eke out a living for a year before he got the regular The Transformers gig. He got the job because the company had heard that he already had the toys.

According to Collins, American comics tend to box artists into a style.

“When they sussed out what you do, that’s all you do,” says Collins.

For Doctor Who, Collins is often privy to information about the show that other people would pay to know. He knew that Chris Eccleston was going and that David Tennant would replace Eccleston long before the general public.

His work in the comic book is to draw things that they cannot shoot on television because of budget issues.

When the opportunity came up to do the storyboards for Doctor Who, Collins figured it couldn’t be that difficult. However, storyboards have a different language than comic books. In comics, the artist needs to capture a scene in one panel. That isn’t the case for a storyboard where camera movement is integral.

Collins had one director tell him that Collins’ job was to show the director what the director didn’t want. A shot that doesn’t work on a storyboard won’t work on film, but the cost is only a couple of sheets of paper and a pencil. Collins has done a lot of work on Doctor Who.

“Doctor Who’s been great for me,” says Collins. “I’m now known as the Doctor Who guy.”

“This isn’t a job. This is a medical condition I get paid for,” says Collins.