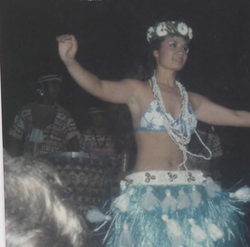 This was the only place in Disneyland where it was possible to see scantily clad performers from tropical locations, and it was okay. The women did dances like the hula, and there was always one guy who did the fire dance.

As with any good Disney show, audience participation was one of the keys to the show. Three people would be brought on stage, put in grass skirts and taught a dance. The end would see two of the people off stage, and a man in the center who would do the dance while three women would dance around him.

He would be embarrassed and ham it up a bit. His family and the audience would be laughing, and a good time was had by all.

When Disneyland closed this dinner show, it eliminated the only real food experience with a cultural flair in the park. Now that Disney owns Aulani, maybe it will consider bringing back a little island culture. Otherwise, it is a shame that future generations will miss out on a fun and educational dinner and show.