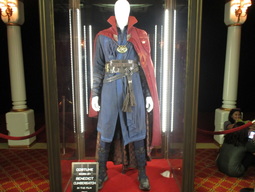 The former Muppet and Frozen Experience Theater at Disney California Adventure is featuring a preview of Marvel’s Doctor Strange. Benedict Cumberbatch introduces the trailer and viewers are transported into the 3D world of Doctor Strange.

The preview itself seems to give too much and not enough away. The superhero origin story is outlined quickly. Magic is explained in bits and pieces, and the special effects are on display in their full glory. While some movie goers have complained that not even Peter Jackson’s Lord of the Rings was able to effectively convey magic. The trailer for Doctor Strange provides decent evidence that Marvel may have gotten it right. Inception like city folding. Lots of wavy hand movements and CGI rendered light shows seem to create a place where magic is believable.
​
While this preview does seem to give a lot away, it was very easy to walk out of the Muppet Theater thinking “WTF did I just see?” Financial advisors are concerned because Doctor Strange is tracking like Ant-Man on a budget that is $30 million’s larger. Cumberbatch is arguably a bigger star than Paul Rudd, especially among women. If Doctor Strange is able to capture that demographic, Marvel movies will become even bigger.