Eating at Marsaxlokk on Sunday 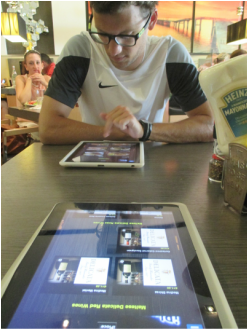 Take a look at the menu on an iPad
Be sure to check out the slide show below.

Marsaxlokk (pronounced “marsa-shlock”) is famous for its Sunday fish market. Those who want the freshest fish have to get there early before the restaurants and high-end hotels by it all. For students who don’t want to travel an hour by bus with fish in any sort of container, the best bet is to eat fish somewhere near the fish market.

Bernhard and I chose to eat at the iPlace, where the menu is handed to its patrons on an iPad that is also loaded with games and extras. A great idea for the children, and I would suspect that there is a plan in place to have all of the ordering done through the iPad at some point in time.

We decided to get the fried calamari, and I ordered the salmon ravioli as a main meal. The calamari was cooked to perfection and spiced well. It was crunchy and peppery and could have been a meal unto itself. I was pretty much full after eating my less than half of the plate, but the next course was coming.

A generous portion of 10 raviolis stuffed with salmon surrounded by a red sauce with swordfish chunks. While the ravioli didn’t live up to its presentation, I blame that more on my salmon standards as a former Alaskan resident. The filling was aromatic and had a nice mouth feel, but the salmon tasted a bit overcooked. The swordfish chunks on the other hand were cooked to the peak of perfection. They could have sat for a main meal with just a little bit of changing.

The décor was appropriately modern with flat screen TVs located in the wall, and shimmering screened lighting to add to the ambience. The serving staff was ultra-polite and joyful even if they were a bit overworked. The iPlace is an interesting place to eat. With a variety of items on the menu, one doesn’t have to choose fish.

The market itself was a mix of sellers with new items, African arts, food, shoes, desserts and other assorted items. There were plenty of fish, including octopi, lampuki and prawns. Not quite a flea market because of the lack of used items, but there seemed to be plenty of items that were close to cheap.