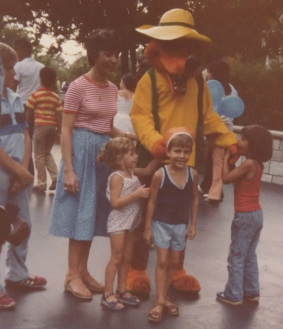 1979 - Far left guest waits patiently.
My sister and I are center.
Are the woman and girl on either side
of Brer Fox a part of our party?
Way back in Disneyland’s history seeing a character in the park was a bit like becoming one of the paparazzi – before that word had ever actually entered the average American’s vocabulary. You would be walking through the park when all of the sudden – LOOK! BRER FOX! – No matter what your destination was, you were now a part of a crowd trying to be the first to meet Brer Fox.

Even if you weren’t the first in line, it didn’t matter because there was very rarely a line. It was a crowd of people who mostly stayed out of each other’s photos – though not always. Everyone got a chance to meet the character and go back to whatever it was that they were going to do before the appearance of someone famous.

While having lines to meet characters is a must nowadays – either because people aren’t as polite as they used to be or because the park is always filled to capacity – it does lack the excitement and charm that chasing one or more of the dwarves past the Wishing Well had back in the late 1970s and early 1980s.

Before you never knew who you were going to see, which meant that you felt lucky to see anyone. Now there is a time, and cast members can tell you where and when a character is going to be. Today’s way isn’t worse. It makes people happy. That doesn’t mean that it is better either.

For someone who has been to the park at least once every year for longer than he or she can remember, it is possible that you still remember the awe you felt in seeing Pooh, especially when it was a surprise. 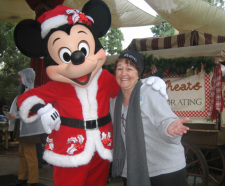 Dec. 2013 - Mom meets Mickey Mouse
at the Big Thunder Ranch
Fortunately, there is still a place where this type of interaction still happens. The Big Thunder Ranch features some of your favorite characters roaming free, interacting with guests in more than just a meet and greet, and that creates the atmosphere of what meeting a character meant decades ago.

As Mickey, Minnie, Pluto and the Country Bears roam the Big Thunder Ranch, there is a cast member around to remind people that there is no line and that the characters will be walking around. The resulting chaos is okay because the Ranch is a lesser populated area than Main Street, U.S.A. or other popular areas for character meet and greets.

Since the Country Bears haven’t been on the west coast for a while, there is a good chance that many of the younger crowd don’t know who they are, which makes it easy to get a photo with Big Al, Wendell or Liver Lips McGrowl. In Dec. 2013 it was also a good way to meet Mickey and Minnie. It is weird to see them without a crowd.