The Blagoveshchensk City Park on Safari 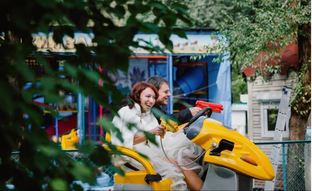 Safari in the City Park
The City Park in Blago has a ride call Safari. Like an outdoor Buzz Lightyear AstroBlasters, each of the ride vehicles has 2 guns and the object is to shoot the animals in the targets (or in the case of the monkeys the targets next to them).

Each animal has 3 target sensors – one on each side and one in the front. Each animal also has a reaction to the shot. Some scream, some nod their heads, and the monkeys swing on a bar. There is a lion, a cheetah and a triceratops. The cars play songs like the Air Wolf theme song and “it’s a small world.” Score more than 60 points and you win a tablet or a smartphone. We’ve scored 22 points (but 36 on our wedding day!) when we have gone.

When we talked about getting married, we had already ridden the Safari once, but when I asked my wife if she wanted to shoot animals, she was aghast. NO! Why would I even suggest such a thing? I couldn’t figure out what was wrong until I realized that she thought I meant actually shooting animals. When I explained I was talking about the Safari ride, she was okay with it. So we went to the City Park and rode Safari and the Carousel while our photographer took photos.
​
When we went back recently, the guy remembered who we were and gave us tips – just keep shooting, and you can shoot targets from far away. We’re going to need a lot more practice of we are going to get a prize though.