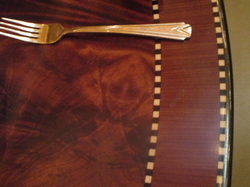 The Evil Queen looks out from the table
Disney California Adventure offers a tour of the Carthay Circle Restaurant daily at 10:30. No reservations are required, and the tour is offered on a first come, first served basis. Even during one of the busiest times of the year, no one was turned away, and a group of about 40 made their way through the restaurant stopping for information about the main rooms and the history of the old Carthay Circle Theater that was torn down in 1969. The tour lasts about a half hour and gives guests a good sense of history and trivia delivered with comedy.

The Carthay Circle Theater rivaled Grauman’s in its heyday and was the theater that premiered Walt Disney’s Snow White and the Seven Dwarfs. The lobby of the restaurant features the theme of “premieres” and photos on the walls are of some of the most famous. One of the photos shows Walt holding a cigarette, which is rare because Walt didn’t want official photos to show that he smoked.

The stairs leading up to the eating area include a replica of the theater’s movie screen cover, which was a painting of the Donner party’s trek. Lilies are used throughout the restaurant in tribute to Walt’s wife, and the tables are made of enchanted forest wood – with the wicked queen looking out from the wood grain.

The Carthay Circle Restaurant has a private room that can be reserved with a deposit of $1000. The table top is placed on top of a replica of the Snow White Wishing Well. 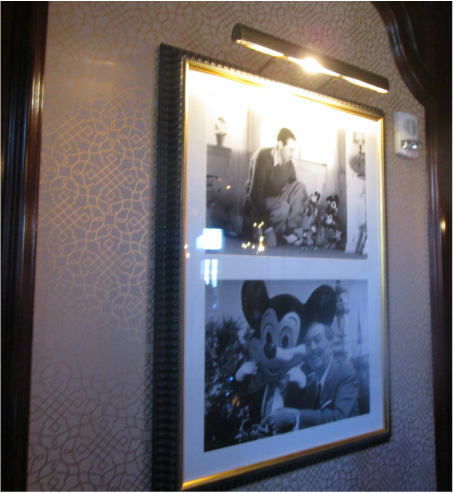