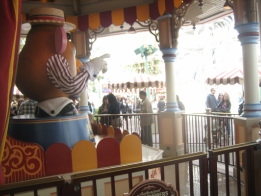 Mr. Potato Head
Toy Story Midway Mania is a favorite of a lot of people. During the week of Dec. 15 to 21, 2013, there was a posted minimum wait of 30 minutes with a maximum wait of 45 minutes. Neither of which is excessive when it comes to waiting for an attraction at Disneyland.

What makes Midway Mania so successful is its appeal to all ages, its element of interaction and the degree of its replayability. As long as your arm holds out, you could go around and around in the line.

Children of all ages love the Toy Story characters. Younger children do not necessarily care about the score. They just like the different screens, and the fact that their actions have an effect on what is happening in the game.

Older children and adults love the scoring component. They can play against the people in the car, against their own scores, and against people who hold the high scores for the hour, the day and the month. As with all video games, there is a sense of accomplishment.

Disneyland’s queue had two games, aside from the interactive Mr. Potato Head. They did a bingo with questions that may allow you to get to know guests in line. There was a prize given at the end.

They also passed out mini Etch-a-Sketches. It was an entirely different experience to see people in line playing with one of the many colors of Etch-a-Sketches, and showing others what they made, rather than watching people text or surf the net on their smart phones.
Check out some Toy Story Midway Mania Secrets