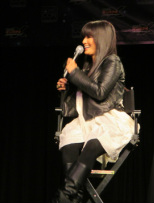 “We were so isolated in Hawaii. I never thought anything applied to me.”

She was failing U.S. History when her mom took her on a tour of Philadelphia and other historical places.

“I basically work so that I can travel,” says Hu.

“My favorite part about cons is getting to watch people dress up,” says Hu.

She enjoys seeing people express their creativity and believes that there aren’t enough Halloweens in the year.

McFadden and Crosby are involved with the Ensemble Studio Theater, a nonprofit that works in Los Angeles and New York.

“[Being on Dexter’s table] was probably the creepiest thing I had to do,” says Crosby. “It was horrific and I hope none of you ever experience it.”

The song A Taste of Honey was written for Williams to sing.

Notes on Girls Who Make Sci-Fi and Fantasy Chic Panel

Jaleta Clegg took Electronics in high school. It was her and 20 guys. She says that after the first two weeks, they guys accepted her as part of the group.

“This is what science fiction is: this is so cool,” says Clegg about Andre Norton.

“It’s surprising how much of the vitriol comes from other women,” says Natalie Whipple. “We don’t have to fight about whose fandom is best.”

“It’s okay to stand up and just be yourself,” says Clegg.

On YouTube:
Mette Ivie Harrison masqueraded as a boy in fifth grade
Laura Hickman talks about infiltrating the boys army games
Natalie Whipple talks about playing video games as a girl
Aneeka Richins grew up as a tomboy
Cindy Grigg had to dance as a man