Dance and rock with the Mad T Party 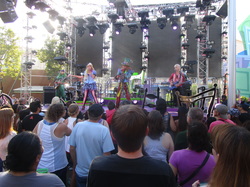 Mad T Party band
Disney California Adventure sends its guests down the rabbit hole for a Mad T Party every evening from 6 p.m. to close of the park. The Mad T Party band does 30 minute sets, and the White Rabbit DJ spins tunes the times that the band is not on the stage.

The hard rocking style of the T Party band and the songs that they choose to cover create an upbeat concert atmosphere that makes the crowd jump, dance and sing along. While the Hatter and Alice are the main draw, the Dormouse mugs his way into the hearts of fans and guests.

Among the songs that the Mad T Party does better than the original artist is Miley Cyrus’ Wrecking Ball. Their treatment of the song with great vocals and a core of rock are light years ahead of Cyrus’ strip down version.

Throughout the night, the band delights the crowd with its music and its antics, and while it is billed as family friendly, parents should be aware that the songs are unedited, asses shake, and the T Party band is as irreverent as its mad characters should be.

The current show closes the night with a tribute to Walt Disney and 60 years of Disneyland. I would gladly purchase music from the group if it were available, and I bet you would to. Go to Hollywood Land and enjoy the Mad T Party band for a couple of sets.