The Honky Tonk Man and Karlee Perez talk wrestling, WWE and their careers 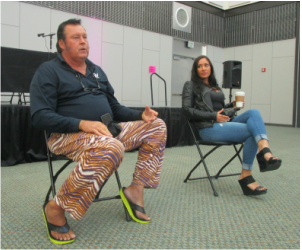 On Oct. 4, 2015 at Emerald City Comic Fest, WWE Legend the Honky Tonk Man and former Diva Karlee Perez talked about their lives in and out of the squared circle.

Before getting into the squared circle, the Honky Tonk Man was a teacher and a coach. He got into wrestling to make money.

“If you’re going into it for any other reason, it’s the wrong one,” says the Honky Tonk Man.

When he started out he was making between $5 and $10 a match, and he had no insurance. If he got hurt and couldn’t wrestle, he wouldn’t make any money, and he had college loans to pay back. He spent 12 years on the road and made no money. Sometimes the promoter would run off and there wouldn’t be a dime for the wrestlers.

The Honky Tonk Man says that Ricky “the Dragon” Steamboat was easy to work with, and they always had good matches. He also enjoyed being in the ring with Jimmy Snooka and Jake “the Snake” Roberts.

“I want to put on a show,” says the Honky Tonk Man, “but you can’t do that if you’re injured or you’re hurt.”

Getting into the ring with substitute wrestlers was always the worst type of match for the Honky Tonk Man. The wrestlers usually had some name recognition, like The Crusher from Milwaukie, but they couldn’t give the best show, and the Honky Tonk Man always wanted to deliver the best performance possible.

“George Steele was a little rough around the edges,” says the Honky Tonk Man.

“We were a wrestling show on TV,” says the Honky Tonk Man. “Now it’s a TV show that has wrestling in it.”

The Honky Tonk Man never had to read a script but says the wrestlers of today can’t change anything that is written in the script. It creates fewer stars.

“It’s kind of robotic,” says the Honky Tonk Man. “We were cartoon characters that came to life.”

It isn’t the scripts that get the awards, but the person doing the character. If the wrestler doesn’t love his or her character, it isn’t going to be done as well. Wrestlers get one shot on TV, and that’s it.

The Honky Tonk Man says that his favorite current star is Randy Orton.

“Every time I say something good about him, he gets in trouble,” says the Honky Tonk Man.

He saw the talent in Dwayne “the Rock” Johnson when the Rock was 12 years old. Like Hulk Hogan, the Rock is able to reach across social boundaries.

“Hulk Hogan changed the way our business was looked at,” says the Honky Tonk Man. “It didn’t matter what race you were, you were a fan of Hulk Hogan.”

Perez entered the business knowing that the best fights were the ones that she didn’t have to engage in. She didn’t want to get injured or get her face messed up. She was 21 when she got into the WWE, and they used her more for promos than for wrestling, which was okay with her.

“I had some great coaches,” says Perez. “Dusty (Rhodes) taught me promotion and character.”

While she learned a lot from her experience in WWE, she asked to be released from her contract because she wasn’t happy with the way things were run.

“I fell in love with entertainment,” says Perez. She learned acting and writing through her WWE experiences.

​Perez has a degree in criminology that she says she will probably never use.