The best Disney memories come from experiences with others 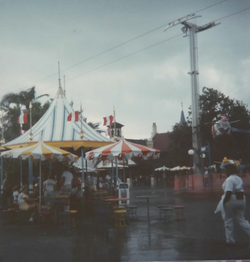 After a downpour at Walt Disney World in 1984
note Dumbo and SkyWay
In 1984, my mom, sister, Grahms, Cousin Kelly and I went to Walt Disney World for what was then a dream vacation. Our family didn’t have much money – at the time, we were living in the projects on the East Side of San Jose – but mom made a vacation every year a priority. It helped to remind us that there were places where hope still flourished and took us away from the daily fears and cares that come from living in HUD housing.

During our trip, the rain was as consistent as a Swiss watch. The downpour would come at 4 p.m. Once we got the timing down, we would laugh as people scattered from the downpour. Our ponchos kept us dry enough and allowed us to take advantage of the smaller lines that came with people waiting out the rain in stores and restaurants or any other covered area. 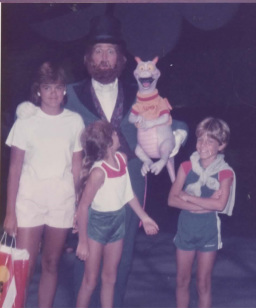 Mom sat us all at a table, took our orders and went to get our food. Grahms always had coffee with cream and sugar, so we had all of those at our table. I looked at Grahms and said, “Do you want to see something cool?”

Grahms said that she would, and I showed her how to use a spoon to catapult Half and Half creamers across the table. It took a few tries, but soon Grahms was able to launch a creamer to a neighboring table where it landed in a cup. I don’t think she did it on purpose, and fortunately, the people at the other table had left.

My mom comes back to the table as Grahms is launching another salvo and says, “Mom! You’re supposed to be keeping the kids out of trouble not causing it.”