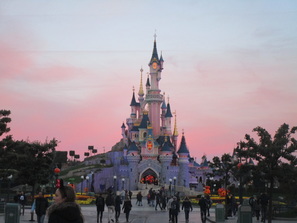 Much like its Anaheim counterpart, the Disneyland Paris Sleeping Beauty Castle offers a walkthrough that tells the story of Princess Aurora, Maleficent and Prince Phillip. However, the European version of the walkthrough features beautiful tapestries, stained glass windows, snoring guards in armor and a walk on the ramparts where Anaheim guests would never get to venture. While Maleficent the Dragon sleeps underneath the castle, in a chamber on the second floor, guests can see the entire story told in different media.
​
When designing the castle, imagineers knew that they could not just replicate the Anaheim castle. After all, real castles are a dime a dozen in Europe, and it is hard to compete with the history of many of the fortresses of old. So the Disneyland Paris Castle was designed to be something that Europeans couldn’t see among the myriad castles in their respective countries. It had to be magical. The castle plays an important role in the Disney Dreams! nighttime spectacular and serves as a backdrop to shows like It’s Good to be Bad with the Disney Villains.