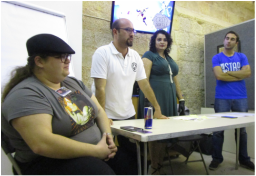 Audrienne Degiorgio, Luke Caruana, Lara Agius, and Daniel Cassar
At Malta Comic Con 2015, members of Graphic Novels Library Malta discussed the representation of women in comic books and some of the female creators in the comics’ scene. While older comic books tended to clad their female superheroes scantily, newer titles tend toward more fully clothed women. These newer titles are also exploring more about what it means to be a teen girl.

“Females don’t need to be nearly nude to be interesting,” says Lara Agius. “We need to make characters that are compelling.”

When She-Hulk came on the scene, she was in control of her powers unlike her cousin. She is also a successful lawyer and an actual woman.

Unlike Batgirl or Supergirl, who have similar male superhero counterparts, Wonder Woman was the first female superhero to be her own entity independent of any male character. While Wonder Woman tends to be the glue of her super team, Storm is a tactician, Sue Reed is a manager, and Black Widow is a former assassin who maintains her calm under pressure. These are some of the different roles that women in comics have.

In the X-Men TV cartoon, Jean Grey and Cyclops tend to have a flat storyline. They love each other, but the storyline goes stale as the series goes on. When Jean becomes the Phoenix, the story seems to go on repeat, and there is no real backstory. With Gambit and Rogue, there is so much backstory and tension because they can never be together physically.
​
A few of the comic creators mentioned include Gail Simon, Alita Martinez and Sara Glidden.