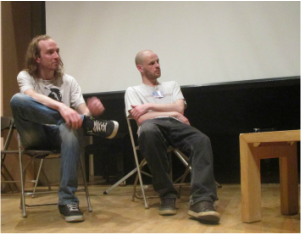 The Maltese elements of the story tell about a time when Malta becomes cut off from the rest of the world. In one story, a man and his dog on Comino are prepared for the catastrophe. The rest of Malta is not and that story will be told through “Maria’s Song.”

“Humanity is the evil that takes place,” says Dhalia.

Malta was the most bombed country in World War II. This has provided the artists and writers of the story with research material, so that the story can be grounded in reality.

Stealth looks to push the boundaries of the graphic novel as art.

“There is so much more that we can do with this medium,” says Stealth. “I’ve got a story I want to tell.”

He plans to tell the story in a way that challenges the conventions of comic books from structure to storyline and from page count to the way that the comic engages the reader.

Because of financial issues, the School had to divide the first story into 20 to 22 page stories, but it didn’t work. By issue four, they knew that they would have to publish a comic book that wqas the size that made sense for the story.

“The potential [for comics] is so great, but people narrow it down,” says Dhalia.

Dhalia says that when people put the project down, he has other people who lift it and him up. He knows how valuable it is to hold onto to those people.