Germany, the country that has weathered the world recession the best, has the best solar program in the world. After the Fukushima meltdown, Germany decided to get out of the nuclear power industry. The country has committed to solar and wind energy as their alternatives, and done so well with it that installation has exceeded national goals. 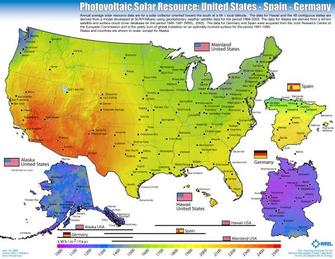 National Renewable Energy Laboratories image comparing
solar in Germany and in the United States.
Using approximately the same amount of sun as Alaska or Seattle gets, Germany produces record amounts of solar power on a regular basis. The country has been so successful with installation that the grid is having trouble handling the power generated.

Germans are experiencing relatively lower energy and are looking to be 100 percent fielded by the renewables in 2050. The big energy companies are going to have to adapt, and the infrastructure needs to be updated, but it is this kind of dedication to keeping their population safe while leading the world that makes the Germans so strong. While they are looking out for themselves, they are also making the world a better place to live.

With the right political will and population demand, the U.S. could easily surpass Germany in Solar power creation. The sun shines down on America, literally. All Americans have to do it harness it like they used to harness wild horses.