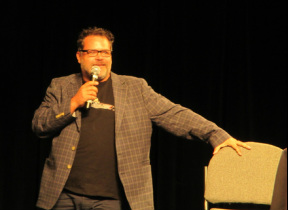 Aaron Douglas, Chief Tyrol on Battlestar Galactica, was able to take his 9-year-old son to the sets for the television show. There were five of them representing different ships and parts of the Galactica.

“The stages were huge,” says Douglas.

The got to the hangar set last, and as they entered, his son’s eyes got wide when he saw the Viper sitting there. The Viper was built life sized. Douglas’ son went up and touched the ship, and Douglas asked if he wanted to get in.

His son said, “Yes,” so Douglas got the stairs and brought them to the Viper. His son mounted the steps got about halfway, turned, said, “Hey, dad, can we…” and made a motion.

Douglas didn’t know what his son was signing, so his son clarified by saying that he knew that his dad didn’t fly them but could they go up anyway.

“It’s special effects,” says Douglas, but how do you explain that to a 9 year old?

Douglas says that the Viper doesn’t fly, and his son says sure it does, and she flies them. He points past Douglas to Katee Sackhoff, who is walking across the stage in full flight gear holding her helmet.

His son finished climbing the stairs, found that the cockpit had nothing in it but things like empty water bottles, gum and other assorted trash. He stomps down the stairs, gets to the trailer and slams the door. By the time Douglas was able to catch up to him and stop laughing, his son was angrily playing video games.

“He hates it when I tell that story,” says Douglas.