The best birthday present might be cultural misunderstanding among friends

27 Oct. 2014 – Tim, my roommate, and Evelyn celebrated birthdays today. I figured that we should throw a party, so I ordered a cake on Thursday and went to the bakery to pick it up this morning with Bernhard, who is one of my flatmates from Austria.

We get the cake, and I ask him what kind of ice cream he wants.

“Um… no, it’s called cake and ice cream, not cake and cake.”

Apparently in Austria, they don’t eat ice cream with cake. I do not know how I missed that. 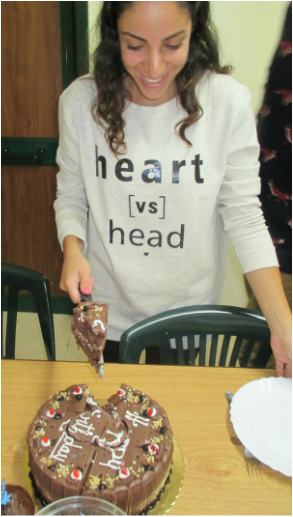 We all get to the cake part of the birthday celebration. Tim and Evelyn make the first cut, straight across the cake. Rand, our friend from Palestine, asks Tim if he wants her to finish cutting the cake, and he gladly gives her the knife.

Then, like a scene out “It’s the great Pumpkin, Charlie Brown!” (see below), Rand raises up the knife and plunges it into the cake just off center. While she is creating a circle with her cut, the rest of us are gasping in horror.

“YOU KILLED IT!” cries Bernhard.

Apparently in Palestine, you cut the center of the cake out and give that to the person celebrating his or her birthday, and when that person doesn’t want it, the kids fight about who gets it. Plus, it eliminates that annoying clump of frosting that allows gets stuck at the end of the knife and ruins the middle of the cake.

But the gut reactions of the other people in the room was hilarious, especially since it was clear that the action came so naturally to Rand.

In Russia, they take their cake with tea.

Every party has a time that it has to break up. As we were saying good night, Bernhard says something like “Mentsupah” to Rand.

Rand looks at me, and I try to clarify it with a “Mentsubah?”

So she goes “Oh, Mensupbah?”

I say, “Sure,” and she says to Bernhard “Mensupbah.”

It suddenly dawns on me… I ask her “What language are you speaking?”

This is where I start laughing because I realize what has happened.

“That’s not German. Bernhard is trying to say ‘good night’ in Arabic.”

“Wait, what, I am trying to say ‘good night’ in German.” After that the three of us couldn’t stop laughing.

With that I wish you mensupbah.