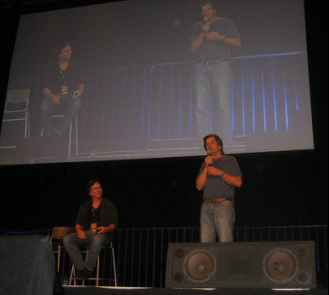 Richard Hatch was renting a room for $80 a month that was over a garage. It had a bathroom, but no kitchen, so he cooked on a hot plate.

“I was in love with every single girlfriend you had,” says Hatch.

Benedict dated Marie Osmond at one point. He says that she was too young for either himself or Hatch. She was about 19 at the time.

The network told Benedict that he needed to stop smoking cigars on the show. They thought that the women wouldn’t like it. When the show went on the air, women sent Benedict cigars.

Benedict is a cancer survivor. He was diagnosed with prostate cancer some time before he got the part of Starbuck.

“I was so happy to be alive and be on the recovery that it didn’t have the same amount of importance,” says Benedict of his work on the show. “I did six auditions for the show.” Thirty-five to 40 years later, he is finally angry about it.

With the news that Starbuck would be a woman in the new Battlestar Galactica, Benedict wrote a blog post about the castration of Starbuck.

“All of television is female driven,” says Benedict. “That archetype (of the lovable scoundrel)… That’s all gone.”

“I look at women, who are amazing human beings,” says Hatch. “Sometimes, it looks like they are playing men roles.”

“This world needs to bring something new to it,” says Hatch.

“There’s a different way to be powerful in the world other than just kicking ass,” says Hatch, “though kicking ass is fun.”

“I wish they would honor both men and women,” says Hatch.

The set of the original Battlestar Galactica was advanced.

“There has never been a bridge so amazingly built,” says Hatch.

Computer companies would send the show video games, and the crew would get together at lunch and play them on the bridge.

“We had an amazing set,” says Hatch.

Glen A. Larson is a member of the LDS Church. The connection to Mormonism came up from an audience member question.

“I was more Mormon than some of the Mormons I met,” says Benedict.

Benedict cited his strong family values and his food storage which Hatch noted was full of scotch and cigars.

See Hatch talk about how Tom Zarek spoke the truth
See what the studio thought of Benedict? The studio says Dirk Benedict wasn't sexy enough
See Hatch and Benedict talk about auditioning for the same roles