Marama Corlett like a (pit) boss at Malta Comic Con 2014 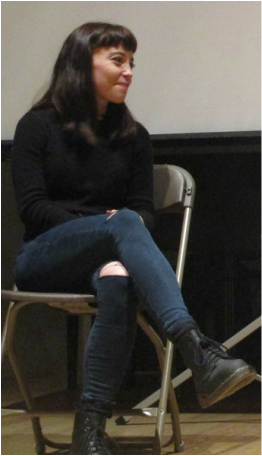 Marama Corlett is credited as the Pit Boss in Guardians of the Galaxy – a role that ended up on the cutting room floor. James Gunn informed her of the cut, which Corlett says is unusual for a director.

“It’s just wonderful for a director to mention you,” says Corlett. “I was just really happy to be a part of it.”

In the scene, Corlett says that Dave Bautista as Drax picked her up and carried her. While Corlett has worked on other productions like the TV show Sinbad and some independent films, Guardians presented her with what a big budget mainstream film was really like.

When she went for the sudition, Guardians was being called something else.

“I had no idea what I was going up for because it was so secretive,” says Corlett about her audition.

Corlett moved to London to be a ballet dancer. While she was there, an agent in Malta called her to audition for a part in The Devil’s Double.

Corlett says that she was lucky to be able to work with Ellen Burstyn on The Crucible. Corlett even uses some acting techniques that she learned from Burstyn.

“Theater is such a beautiful medium,” says Corlett. “Things change every night.”

Corlett keeps herself busy during times in between jobs by practicing other artistic endeavors.

“The Arts is wonderful,” says Corlett. “It does help you express.”

Corlett wants to help other Maltese move forward with their dreams.

“There’s a lot of talent here,” says Corlett of Malta. “If you have a dream, you just go for it. Things will happen.”