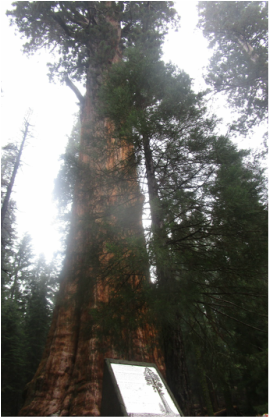 General Sherman - the world's largest tree by volume
Check out the slide show below.

When hiking through the land of giants, it is important to pay attention to your surroundings. Sequoia National Park features the largest tree by volume, General Sherman, and some great hiking trails. It also has abundant wildlife, including squirrels, deer and bears.

Our day started out with a great breakfast at the Ol’ Buckaroo in Three Rivers. From there, we drove into the park and hit the trail to Moro Rock. The elevation and the elevation gain conspired with the narrow trail to slow our descent as we had to give way for those who had already made it to the top. While lightning flashed and thunder grumbled in the distance, the weather was clear and bright where we were.

Looking out over the landscape, we weren’t as far from civilization as we wanted to be. Pollution blows in from as far away as Asia and as close as our own car exhaust systems, leaving the vista in a haze of small particulates. Cell phone service invades even these seemingly remote lands, high above the rest of the Earth.

We returned to the trail to marvel at the size of the trees. These old behemoths are immune to fire, bugs and other natural enemies. In fact, they seem to only die from losing their balance and falling to the earth. A shallow root system that is disturb by erosion, fire and/or man could cause one of these giants to topple. Even if there is no one around to hear it, it would certainly make a sound.

As we hiked along the roadway, deer were in abundance and undisturbed by our intrusion. The wandered and watched but were left nonplussed as the thunder rolled far away. Meeting a few souls along the road, we offered to take group photos. The reciprocation allowed both groups to have photos that were better framed and included the largest possible parts of the trees in question. No selfie could ever express the sheer size of a Sequoia.

We finally took to the dirt on our way to Tharp’s Log – a tree so large that a man made it his home. While it was somewhat less impressive than it sounded, we couldn’t tell if that was due to the actual size compared to our expectations or the dark of the clouds crowding out the sun above or possibly both. There was some concern about being in the woods with a thunderstorm approaching, but heading back wasn’t an option. So on we went, deeper into the woods.

With limited signs and no map, some would have said that we were lost. However, not all who wander are lost, even when they proclaim to not know exactly where they are. We made our way over well-worn trails, and the clouds opened up. Lightning flashed just over our shoulders and thunder clapped our ears.

Then someone pointed out what may be the most fear-inspiring portion of the trip – a bear was digging at a tree to get to the grubs below. As the others began to back away, I got a few grainy photos that seem to focus on the rain between the bear ad us. Sure, it could just as well be Bigfoot, but being in California, I am calling it a Golden Bear.

We reached a sign, and someone suggested that we go back, 1.7 miles, the way we came. At least, we knew that we could find a bus and shelter from the rain that was now coming down harder. However, my aversion to returning and my innate sense of direction, along with my confidence in that sense, would not allow me to lead the group in the sure direction. Instead, I persuaded them to continue.

When we reached where the trail met the road, there was a visible release of tension. We were all soaked by the warm(ish) California rain. Still one giant stood in our path. General Sherman beckoned us to get a photo, and with that, we returned to where we had parked our cars. The rain let up, and we visited the Ol’ Buckaroo for a well-earned, delicious and responsible dinner.