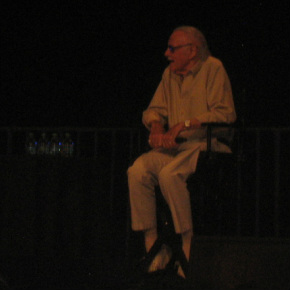 “I haven’t got time to read books.”

“It doesn’t matter what’s happening” in a couple of months, it will be back to normal (in the comic book universe).

I’m such a fake. People give me credit for things and I accept it.

On Dr. Doom, who is one of the biggest super villains in the Marvel universe. “He has never done anything to be arrested for.” He just says that he wants to take over the world. If you or I went to a police officer and said that we wanted to take over the world, the officer couldn’t arrest us. DC never came up with a character like that. 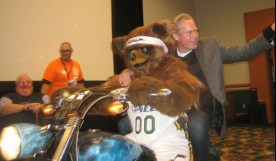 Dan Farr rides in with the Jazz Bear on Day 1.
Simon Fisher-Becker seated in the background
Dan Farr

Norm was my coach when I was there (Salt Lake Community College).

I was sucked in by the energy of Comic Con.

Notes from the Violence Panel:

I’m kind of known for my body counts.

“If we’re invested in the character, then the violence can be just excrutiating.”

If you come in too high, there’s nowhere to go in your story.

There is a higher tolerance for violence in the written work than the viewed work.

“How do your characters deal with the violence?”

There’s no formula; you need to write the way that is right for you.

The best villains are the heroes of their own stories. – Orson Scott Card

“The effect of the violence is what I am looking for.”

Emotional violence can be as traumatic as real violence.

When is it too much? panel

The bumbling thieves in Home Alone feel justified in their actions. They want to get the kid because he did something to them.

The morale of Home Alone is “there are bad people in the world, but we can overcome them.”
Celebrity Causes:

Joss Whedon – Equality Now. Why do you write such strong female characters? Because you are still asking that question.

Kevin Sorbo joined A World Fit for Kids in 1997. the foundation is helping over 12,000 kids in L.A. County where there is a 54 percent dropout rate. The kids that are a part of the program do three hours of after school work.

“There’s a purposeful dumbing down of kids in the nation today, and I don’t get it,” says Sorbo.

Check out Shad Engkilterra’s YouTube channel for video of the convention.