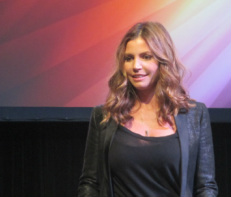 Charisma Carpenter sat down with Tony Toscano and had a conversation while answering questions from fans at Salt Lake Comic Con 2014.

Carpenter spoke about September being pediatric cancer awareness month and gave a shout out to the Ronan Thompson Foundation. She also asked fans to encourage the Empire State Building to go gold for the month. The Empire State Building has been lit up in several other colors for reasons that include celebrating Mariah Carey’s new album and for a Snapple campaign. However, according to the New York Daily News, building officials have refused the request to go gold for September.

“I didn’t leave. I was not invited back,” says Carpenter. She doesn’t think they knew what to do with Cordelia after her character arc took the turn that it did. “I guess they thought that Spike and Angel had more chemistry.”

Cordelia was Carpenter’s heart and soul. She missed doing the show.

“She’s me, and I’m her. Like, we are each other,” says Carpenter. “Through working as Cordelia, I found my own voice.”

“She helped me grow up in a positive way.”

Did she have input on the script? “Not on Buffy or Angel because I didn’t have anything to bring to the table.”

It was fun to be Cordelia on Buffy “because she had the best lines ever,” says Carpenter. However, Carpenter had more to do on Angel because she was the second lead. “Each show brought to me different gifts.”

Joss Whedon is a “phenomenal boss.”

“He will keep doing takes until he gets the take he’s looking for.”

She enjoyed the role of Maggie on Supernatural.

“I really like to get physical” and do physical roles, says Carpenter.

The pasty ends up on him, and it’s all just awkward.

It was fun, and it was really neat to be around all of those personalities.

Sylvester Stallone is an epic storyteller.

“He loves to entertain people.”

On Acting and Life

“Acting is not acting,” says Carpenter. “Every role is different.”

Being the bad girl? “It’s kind of my go to thing,” says Carpenter.

If she could, Carpenter would be a professional tennis player, a professional actress and an adventurer. There’s just not enough time to do all of the things that she wants to do.

When acting found her, it was kind of the road to take.

“It’s important to know your craft,” says Carpenter. “If you want to be an actor, just act.” Don’t be an extra; don’t be a director.

“There are aspects of my life that are super together,” says Carpenter. And there are other aspects that are a disaster. “We’re all in it together.”

Her parents named her after a “stinky Avon perfume.” “I smell great” though.

Carpenter read a lot, especially as a kid in school.

“The best way to get life experience is through books.”

She says that “there’s something about a heel” that helps her get into character.

“To thine own self be true.”