Dinosaurs in film and comics at Malta Comic Con 2015 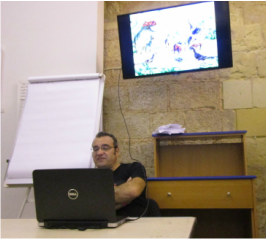 David Pace
Bringing knowledge about real world and fictional dinosaurs to the discussion, David Pace presented “Dinosaurs in Comics and Film” at Malta Comic Con 2015. The first on screen dinosaur was Gertie in 1914. Sir Arthur Conan Doyle’s The Lost World inspired many films. The earliest of which was released in 1925. Harry Hausen used stop motion animation to bring dinosaurs to the big screen in the late 1960s.

Because special effects are cheap now, “a lot of dinosaur films are being made. Not all of them are good, but it’s always nice to see a dinosaur,” says Pace.

Comic books have featured dinosaurs as portrayed in Jurassic Park as well as dinosaur superheroes and villains. Sauron the Dinosaur, Dr. Dinosaur, Devil Dinosaur and Stegron the Dinosaurman are aome of the characters inspired by dinosaurs. Autobot Grimlock was a dinosaur robot, and there is a controversy surrounding the origins of Godzilla – is he a dinosaur or a mutated lizard?

Pace says that the legends of dragons probably came from the discovery of dinosaur bones in the desert.