Captain EO and The Starcade 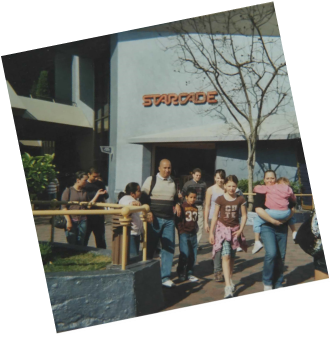 The Starcade in the background around 2008
Captain EO – it may be heresy to say, but the Michael Jackson film needs a serious update. Bringing back some of the old effects would be one of the best things that Disney could do if it still wants to run the film. Otherwise, it is time to find a new film. Just don’t go back to Honey, I Shrunk the Audience. Wayne Szalinski has more than run his course. At least, Captain EO is futuristic even if it is from the 1980s.

The Starcade – this used to be a two-story funhouse of video games. I would bother my mom for hours to go and play in the arcade. Something we could ill afford, and more importantly, something my sister despised. The general compromise was that I would get a dollar, my sister would get a dollar, and when my sister was done, I had to finish whatever game I was playing and then be done. I ended up with a lot of spare quarters.

There are still video games along the edges of the wall, but the rest of the downstairs has been turned into a store featuring Disney Park Merchandise, the Disney Infinity and a lightsaber station. The video games range from new to old and there are plenty of classics to get excited about – like Dig Dug. Perhaps the most brilliant game in the place is a full standup version of Fix-It Felix Jr.

Fortunately, I didn’t bring any quarters with me, or I might have been found playing a video game in Disneyland.
Go back to Autopia and the Monorail
Go back to Tomorrowland is Todayland
Go back to Finding Nemo Submarine Voyage
Go back to Disneyland Railroad, Space Mountain and Innoventions
Skip to Star Tours, Buzz Lightyear's Astro Blasters, Astro Orbitor