The comedy music show featured four brothers all named Billy who played country/folk music. For the Christmas season, the Orange Blossom Special was transformed into an amalgamation of 9 Christmas tunes. Billy Hill’s crazy tooth gag was used for the singing of All I Want for Christmas Is My Two Front Teeth. 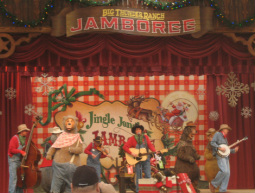 It is always sad to see established wholesome entertainment leave the park. Here’s to the hope that something better is on the horizon for Billy Hill, his brothers and the Disneyland show that will replace them.