Moana gets A Bug's Life treatment at DCA 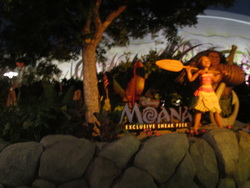 A Bug’s Life Theater in Bugs’ Land at Disney California Adventure has long been adapted to show previews of movies that Disney is releasing. In the past, both Maleficent and Ant-Man were previewed here. This trip, it is Moana that is getting A Bug’s Life treatment, and it is amazing.

Whether or not Moana is a good film is yet to be seen, but watching the preview, the film already looks amazing. The expanse of the sea, the next collectible craze (spoiler alert: coconuts) and the comedy are all evident in the time that the audience spent at the preview.

The 3D glasses aren’t the only effect that is employed. Water and a sharp sting to the back are also used. As is the bug crawling effect. Of course, only the 3D will be available in conventional theaters, but it certainly looks like it will be worth it.

If you happen to be in Disney California Adventure while the preview is still playing. Stop by and visit, you won’t be disappointed in this Moana preview and Dwayne Johnson, just voted sexiest man alive by People does an introduction.