Why the PhotoPass is important to vacation 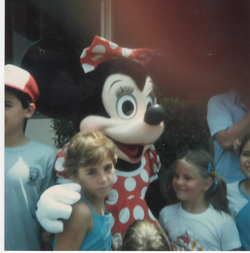 Sometimes, getting your finger in the photo
was the only way to be in the photo.
Does my sister look like she wants to share?
Short Story: Yes, you should get the PhotoPass CD from the Disney properties. (In case you do not want to read the whole thing about what experience has taught me.) Click here for the “What do you get?” section.

Long Story: If you are anything like my family, you have a lot of photos where there is one person missing from the picture. For my family, it is usually mom or Grahms or both though sometimes we have a photo of mom taking a photo of Grahms taking a photo of God knows what because I am pretty sure that Grahms didn’t know half the time what she was taking photos of.

The point is that even in a place like Disneyland or Walt Disney World, where cast members are more than happy to take your photo – they even offer, and they are instructed to offer if they see someone taking a photo. That is part of the magic of Disney. However, there is something that is even more magical – the Disney PhotoPass.

Mom taking a photo
Back in the 1980s, I sent a letter to Disney saying that they should hire photographers to take pictures of people in the park. It is a brilliant idea, and Disney wrote back and said that they don’t take suggestions from outside the company. However, about a decade or two later, they implemented a photography corps that takes photos of people in the park.

The photographers are usually students who are looking to go into photography. This alone makes the photos about three times better than what you can get on your own. Add the fact that the whole family gets involved and the photographers have special things they can do in the “development” process, and you have a special memory.

Best Spots in the Park

Disney used to mark its properties with Kodak Spots. Now they station a PhotoPass photographer in those spots. They are the most picturesque spots in the park. The cast member gives you some space so that people aren’t bumping into you. It is perfect. (Hint: Even if you aren’t using the PhotoPass system (though you should be) the photographer will usually be happy to grab a few shots of you and the family with your own camera.)

Shots you wouldn’t otherwise get

Other than the fact that everyone gets in the photo and that there are special processing things that can happen to create a new memory, the PhotoPass cast member is going to be getting some candid shots of you and whoever you are interacting with before and after the posed shots. These extra shots are like little surprises that are even better than the posed photos in many respects.

It seems self-explanatory. However, if you are walking around and you know that you are going to get a PhotoPass, there is nothing better than finding a PhotoPass cast member who is being ignored by virtually everyone else walking by. How can people ignore the smiling face next to the waterfall on the backside of Grizzly Mountain? I don’t know, but it happens a lot.