What I just learned from Doctor Who Series 7 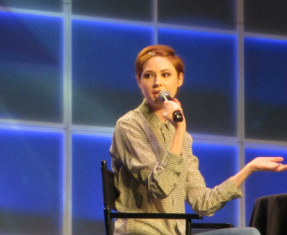 It only took me four Doctors and several companions depending on how they are counted to realize that Doctor Who is all about saying good-bye, and saying good-bye may not be the big bad wolf everyone makes it out to be. It is perhaps the fact that even the lead star can and does die (or regenerates) that makes this show so special. No one is ever safe until the episode is actually done airing. (Even then, I am told there is something called a “time beetle” that has the Whovians all atwitter.)

I started watching The Doctor with Chris Eccleston and Billie Piper as Rose Tyler. I could relate to him, fell in love with her and loved the chemistry the two of them possessed. When David Tennant became the Doctor, I stopped watching the show. I didn’t even know that the Doctor could die. How could the show take away the Doctor I had grown so fond of and turn him into someone with such great hair? How am I supposed to relate to that?

A friend of mine convinced me that I just had to get over it and continue to watch the series. After about six months of moping and with nothing else on Netflix to watch, I tuned back in. David Tennant did not become my favorite Doctor, and I was upset when Rose left the show, but I persevered. I was rewarded with Matt Smith and (heartbeat) Karen Gillan as Amy Pond. (Gillan reminds me of Audrey Hepburn – can’t wait to see her in Guardians of the Galaxy… Gillan not Hepburn.)

And I know that Smith and Gillan will be gone, too. (Pond has already met her demise.) However, what I am learning is that everything in life ends, and if I can just get over the end, I might something just as good, or possible better, just around the corner. All it takes is a little bit of perseverance.