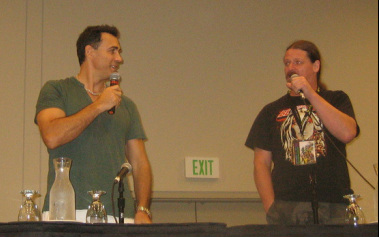 Adrian Paul talks with moderator Sean Smithson
Adrian Paul got a call about Highlander: the Source. The script was read over the phone, and he agreed to do the film. When the script arrived a month later, it wasn’t the same script. By the time they got to filming, the new script was only 3/4s done. No one knew the ending. Paul was the only producer, which was a problem because if he had to change something the question was if he was being a petulant actor or if he was being a producer.

Paul worked with Bob Anderson for the sword fighting scenes. Paul said that Bob would throw himself on the ground at age 60 or 65, and Paul was like, “No, no, let me do it.”

They wrote some of the action scenes in when they found out that Paul could do the actions.

“… hanging from the bonnet of the car, the hood of the car… bonnet? I’m in America.”

“Highlander is about the relationships,” says Paul. “To me, that’s what people watch.”

“There were only three people I did not get on with,” says Paul about working The Highlander series.

“There were a couple of questions in Highlander that remain unanswered,” says Paul. “Where do immortals come from? Not space.”

The hardest scenes for Paul to do included taking Connor’s head, when Richie had to be killed, and Joe Dawson dying on the show.

“I always liked McLeod going back to his roots” as storylines.

“It’s like being a martial artist; you have to paint with different colors.”

“As a director, I got better as I directed,” says Paul. “The best directing, technically, was Methuselah’s Gift.”

When Paul went to shoot one of the Highlander films, they tried to give him another sword. “It’s like changing your baby out.”

“Obviously, I loved wearing the kilt,” says Paul. “It was drafty.”

“The minute you put that costume on,” Paul says that you become that character. “The costume really gave you that feeling.”

They’re remaking the first Highlander movie. Ryan Reynolds was attached to it but has backed away.

“You can’t really judge somebody until they do it (play a role).”