Magician behind the curtain, an editor's job at Malta Comic Con 2015 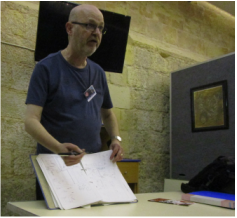 John Freeman
At Malta Comic Con 2015, John Freeman said that an editor was the magician behind the curtain who had several jobs, especially at a magazine that was published on a regular basis. Editors are responsible for planning the content and making contingencies for when a story misses a deadline or is not viable. Typically, editors will plan 6 months ahead for a monthly magazine and between 16 and 20 weeks ahead for a weekly periodical.

In comics, it is important to get the script and the plot right before commissioning the art because that part costs less. Because every issue is a first issue for someone, comics have establishing shots that usually include full figures of the characters. This is a kind of short hand that engages new readers, by showing who the character is, without alienating readers who have been following the comic for a while. Comic art can do things that physical cameras, especially in television cannot do.

The editor has to make sure that the book or magazine gets promoted. Often times, this means that the editor is doing the work. Leaving promotion to the marketing department is problematic because they will never promote a book the way that the editor would want. Using social media nowadays is one way to promote comics.
The budget and other financial concerns are also the responsibility of the editor. Artists and writers need to be paid, and sometimes, the financial department is slow to do so. Magazines and comics also should not exceed the budget allowed for each issue.

The most expensive part of the comic tends to be the cover. Editors may plan for a “second” cover that is visible when the comic is covered up on the newsstand. Usually the left side and left upper corner are visible when placed on a rack with other comics. This is the second cover that can be used to attract readers to buying the magazine or comic.
“It’s great fun doing comics,” says Freeman, but it is also a lot of work.