Old and New Boba Fett unite on Stage at FanX 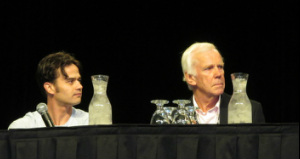 Logan had never heard of Star Wars in New Zealand.

“I grew up in that time period with no Star Wars,” says Logan.

“You just have to be yourself,” says Logan.

Logan got a book signed by everyone on the set of Attack of the Clones from the Boom guy and caterer to Natalie Portman, who will usually only sign for charity.

Eight years after filming Attack of the Clones, Logan was offered the part of Boba Fett in the Clone Wars TV series. George Lucas wanted him for the role.

The difference in voice acting was that Logan had to bring the same passion for the cartoon and had to figure out how to get the voice to convey what movement normally would. Logan got help from Corey Burton, who voices Cad Bane in the series, took time to be help Logan with scripts and how to voice them.

“That’s the cool thing about acting,” says Logan. You get to work with cool people.

Logan considers the Clone Wars another side of the Star Wars family.

“I loved it. It was Star Wars,” says Logan. “Star Wars is awesome.”

On YouTube:
How did Jeremy Bulloch become Boba Fett? He fit in the outfitDaniel Logan at FanX hamming it up for the crowd
Jeremy Bulloch talks about stepping on Darth Vader's cloak
What happens to Boba Fett in the Sarlacc?