What is the drive for Autopia? 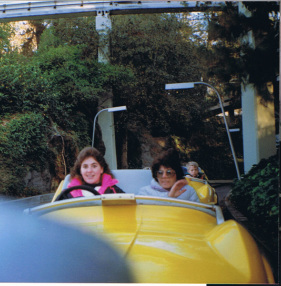 My sister and Grahms ride Autopia in 1989.
Crazy eyes on the Autobahn sis is on the road.
There are attractions at Disneyland that I never understood the popularity of. Most of them were the attractions that my sister loved and I did not.

Our family always had the philosophy that we would go on every ride at least once while we were at the park even if we were only there for one day. (Back then crowds were smaller, there were fewer attractions, and we were younger and more energetic.)

Unfortunately for me, this meant riding the Autopia twice – because there were two of them. No matter how I argued that they were the same ride and we could be doing something else, the rule stood and we drove little gas powered cars around a track with a guiderail. More importantly, my sister loved the ride.

Aside from the fact that most of the time we had driven to Disneyland and I could see no reason why we would want to sit in another car for any length of time, the biggest problem was that I was tiny, which meant that I couldn’t really reach the gas pedal to make the car go.

If I was lucky, it wasn’t just my mom, my sister and I at Disneyland. Usually Grahms went with us, and she could press the pedal.

If I wasn’t lucky, I could find the go spot, step on it, and hold it down for about half the ride. Then my leg would get tired, and I would have to jack-rabbit my way through the rest of the course while the person behind me would inevitably be unable to avoid hitting my car.

At some point, my sister stopped insisting that we go on Autopia. Maybe it was after she got her license. That was about the time that Disneyland was giving out free Chevron car models to people who were savvy enough to know to look at the back of the Autopia driver’s license.