Dumbo the Flying Elephant
If a president doesn't have to ride it, why should I? 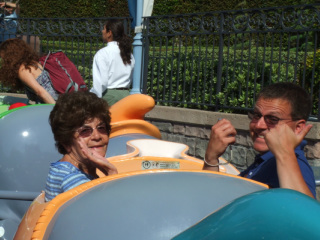 Grahms and I in the lead elephant (2010)
Sideways thumbs for my sister
I have read that Eisenhower would not ride on Dumbo because he didn’t want to be caught on something that looked like the Republican symbol.

Dumbo is one of those rides that my sister loved, and I did not. All you do is go around in a circle and move up and down. There isn’t any speed to it. There is nothing to commend it.

When we would ride it, one of two things would happen. I would pull all the way back on the stick and fly at the highest point possible until the ride stopped.

If we were being playful, one would grab an elephant in front of the other and then we would play follow the leader. This game made it feel like we were chasing or being chased depending on the position.

The problem isn’t really the ride itself. At least, it is shaped like Dumbo, and has Timothy Mouse cracking a whip at the top of the attraction.

The problem is the wait. There is always a far longer wait than is reasonable for this ride. Thankfully, my sister grew out of it, and her kids did as well. Now we just go on it when we are in a nostalgic mood and the line is tiny.