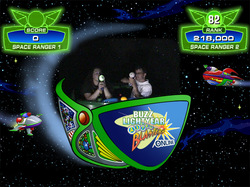 An email freebie from Buzz Lightyear's Astro Blasters
Disneyland gets a lot of grief for being expensive, and with single day passes approaching $100, the criticism is valid. However, the Disney Company is known for delivering value, and Disneyland and its sister park, Disney California Adventure, offer some great free items for the savvy visitor.

Aside from access to attractions, like Space Mountain, Twilight Zone Tower of Terror and the Haunted Mansion, that is only limited by time and the crowds at the park, guests at Disneyland can find a whole host of shows and parades that are included in the price of admission. It is also important to note that Disney’s FASTPASS is included with every ticket. Major attractions like those mentioned above have a special ticketing system that allow guests to skip the lines, enjoy other attractions and come back later in the day during the one hour time interval marked on the FASTPASS. (Read how the FASTPASS system works.)

At the French Market, the outdoor pavilion hosts Queenie and the Royal Street Bachelors who play New Orleans jazz tunes and offer witty banter. Guests may even become a part of the show as Queenie sings and hands out beads to those celebrating special occasions. Younger guests get special consideration.

Pieces of Eight, also located in New Orleans Square, offers a page to color for guests. Typical subjects include Jake and Peter Pan. Since crayons are located near the coloring pages, parents can get a rest from their children while doing some shopping.

Take out the evil Zurg and his battery stealing robots at Buzz Lightyear’s Astro Blasters, and when you are done, get a copy of your score and a photo emailed to you. The only thing you have to do is shoot straight and stand in line with everyone else that is trying to send their scores home. Typically, the far end monitor has the shortest wait. For those who score high enough, the email may contain the score’s ranking for the day.

The Ghirardelli Soda Fountain and Chocolate Shop on the Pacific Wharf offers a free sample of chocolate with every visit. No purchase is necessary, every member of the group gets a chocolate, and the samples are available multiple times per day. Just across the way, the Bakery Tour hosted by Boudin Bakery offers samples of sourdough bread. No one is going to get filled on either of these two treats, but they might be just enough to take the edge off for another hour.

The Animation Academy in Hollywood Land offers guests the opportunity to draw Disney characters. The classes are fun, informal and nonthreatening. At the end of it, the guests get to take their drawings home. One lucky guest may even get the drawing that the instructor did so sit in the front row.

Character meet and greets are plentiful and only cost the time it takes to stand in line for them. Main Street, U.S.A. has the Big Five in the morning and may host Cruella DeVil and other villains later in the day. Near the Wishing Well in Fantasyland, guests may meet the Evil Queen from Snow White, the Fairy Godmother, Aurora and Peter Pan. In Adventureland, Aladdin, Jasmine and the Genie are the main character attractions. Mickey’s Toon Town allows guests to meet Mickey and Minnie, who is hosting a tea party, in their respective homes. Tomorrowland hosts the Avengers, Captain America and Thor. Pixie Hollow, home of the fairies, and the Royal Princess Revue, home to the Disney Royals, offer character experiences.

At Disney California Adventure, Mike and Sulley from Monsters University, characters from Disney Junior and the Incredibles can be met at Hollywood Land. Those who have a Disney Visa can get a free photo at the exclusive Disney Visa Meet and Greet. Mickey and the gang and Oswald, Walt’s first successful character can be seen on Buena Vista Street. Goofy and Pluto have both been spotted at the plane in Condor Flats.