Gates McFadden and Denise Crosby Beam Out of Star Trek:TNG 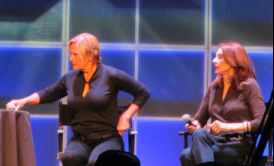 “If it were not for Playboy magazine, I would not have become an actor,” says Denise Crosby.

She was cast for her role from the photo-shoot.

“I did it in total rebellion from my family name,” says Crosby, whose grandfather was Bing Crosby.

“I was getting increasingly concerned that this was going to end up a background job,” says Crosby. “I thought I would have an engaging storyline.”

Gene Roddenberry said that it wasn’t going to get better because the story would always be about Picard, Riker and Data.

“The last thing I wanted to do was to bring that energy [frustration] on the show,” says Crosby, “so I made the decision to leave.”

Gates McFadden turned TNG down twice because she wanted to work with Linda Hunt in The Matchmaker play by Thornton Wilder.

“I evolved as a person,” says McFadden, who was at first frightened by the fans. “At the time it was a job, but it became more than that.”

While in her trailer signing photos for fans, McFadden’s then two year old said, “Mommy, stop signing your face and play with me.” That made McFadden take another look at her work schedule.

McFadden was fired from TNG when she had an issue with the writer, and the writer issued an ultimatum. When they asked her to come back, that writer was fired.