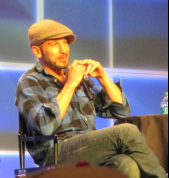 “It was right. He was becoming a cancer,” says Bernthal about Shane’s death. “The show is about Rick, and Shane needed to go.”

The Walking Dead is about pushing the envelope.

“When we had violence, and we would kill zombies, we could do that,” says Bernthal. “With sex scenes, all you can really show is man ass.” How can a show compete with paid television?

The scene in the Hyundai was edited in such a way that the execs wouldn’t let it get on the show. There was no nudity, but the scene got cut anyway, so all fans got was the rocking Hyundai.

“Shane was the first one to figure it out,” says Bernthal, who points to the scene when Shane takes on an abusive husband and beats him to within an inch of his life. That scene was the dawning of Shane’s revelation; there is no law. People can get away with pretty much anything. There’s no room for doing the right thing in the apocalypse.

Bernthal enjoyed the episode when Laurie died because it was done with such honesty.