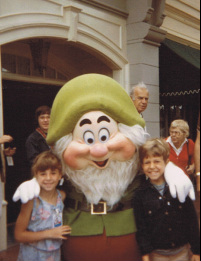 Happy poses with my sister
and me in 1982
One year at Disneyland, when my sister was very young, she decided that it was a good idea to kick the characters. Who knows why?

So the dwarfs came out and my sister went up to a dwarf and kicked him. This was a time when the dwarfs had hard bodies, so there was a thud.

My sister laughed and ran to the next dwarf while mom shouted at her to stop kicking the characters. Of course, my sister didn’t listen.

My sister ran to the next character who was not a dwarf. It was Tigger. Tigger did not have a hard body. Tigger is a soft animal, and my sister kicked him.

Before anyone could react, Tigger spun my sister around and swatted her in the butt. My sister was so shocked that she never kicked another character again.

Mom contends that Tigger must have been a mother.

While nowadays that action would probably result in a lawsuit, back in the 1970s and 1980s, it was allowable. I don’t suspect that Tigger suffered any consequences since my mom was fine with my sister learning a lesson about kicking characters.

Better yet, we have a family story that will live on for as long as we do. I think my sister laughs at it now, but I am not sure how much she likes Tigger.