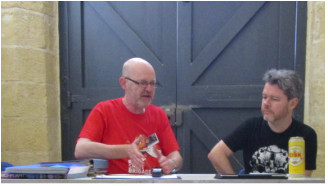 John Freeman and Chris Thompson
Malta Comic Con 2015 put a spotlight on editor and writer John Freeman. During his panel discussion with moderator Chris Thompson, Freeman discussed his career in magazines and comics, which included working as editor on Doctor Who Magazine during the “wilderness years” when the Doctor was not on television.

“Every issue of a magazine is the first issue to someone.” Freeman took this to mean that the editor had to keep the people who were avid readers happy while also attracting new readers. One strategy he used was to deliver the unexpected. Freeman also says that magazines and stories shouldn’t give people what they want because people often do not really want what they say they want.

“You’ve got to expect to be edited,” says Freeman about writers working on a commercial product. For new artists, Freeman suggest they copy the art of their favorite comics. It isn’t something that should go into a portfolio but is a good exercise that helps deconstruct how something is put together. Editors have several jobs, but one priority is to get the story right before it goes to the artist.

According to Freeman, comic conventions could fill the role for independent artists and writers that live concerts fill for music acts. The artist just needs to know which convention will work for him or her.